US stock markets fell yesterday indicating a new stock market warning with the Dow Jones Industrial Average dropping -0.25% while the Nasdaq sank -0.28% and the S&P 500 fell -0.11%. The fall comes after four days of rallies took global markets to a record value of $63.8 trillion and saw the S&P 500 hit another new high at 1911.91.

The elevated position of most stock markets appears to be reaching new heights now and it would be no surprise to see a significant period of weakness come in over the next few days and weeks. Most notably, volatility levels and other market indicators are suggesting that a market top may be near. Volatile price action in the last hour of trading yesterday may also indicate a shift in trader sentiment.

The CBOE Volatility Index, known as the VIX, dropped to the lowest level since March 2013 on Monday and has stayed under 15 for the last 16 of 28 trading days. The VIX now trades at a historically low level of just 11.68 and this has caused traders to load up on VIX call options according to research from Bloomberg. In fact, VIX calls have reached their highest levels since 2008 as traders anticipate a spring back in volatility over the next couple of weeks.

As you can see from the chart, the VIX does not usually stay at such low levels for long so volatility could well ramp up soon.

As well as the significant drop in volatility levels, StreetTalkLive report that bullish sentiment among investors as reached high levels and such levels have been consistent with previous market peaks. 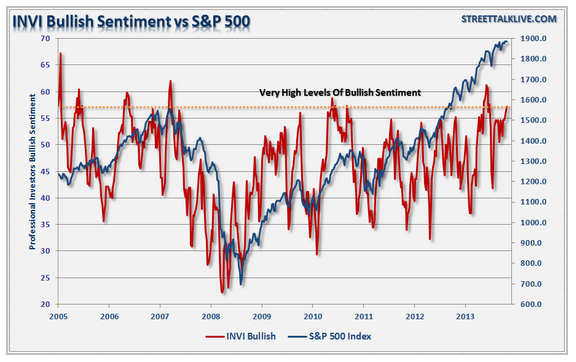 StreetTalkLive also show how the stock market has gotten ahead of itself and diverged from the 36 month average significantly. This has been another good indicator of market tops in the past as shown in the below chart. 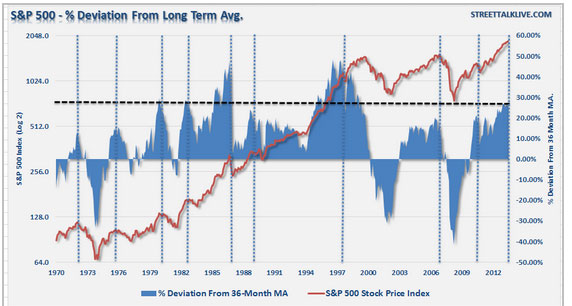 Further indication of Hedge fund manager John Hussman reports that the fund’s measure of current market conditions present “overvalued, overbought, overbullish extremes [that] match only a handful of prior historical instances including 1929, 1972, 1987, 2000, and 2007”. Hussman goes on to suggest that the fund expects 10 year S&P 500 total returns of just 2.3% annually from current prices.

A number of important market indicators have reached extreme levels and this is likely a precursor to a rise in market volatility over the next couple of weeks that could lead to a significant market correction of 10-20% or more. Traders should use extra caution at this time and refrain from entering any new positions until the overbought condition has cleared.

Joe Marwood / About Author
Joe Marwood is an independent trader and writer specialising in trading systems and stock trading. He began his career trading the FTSE 100 and German Bund for a trading house in London and now works through his own company. He also writes for Seeking Alpha and other financial publications.
More posts by Joe Marwood